Prishtinë, 21 December 2020 – Last night at about 23:50 information were received about a case of wound with firearms at the str. “Hasan Prishtina” in Podujeva.
Police went to the scene and based on the initial data of the examination and those of the interview, suspicions were raised that a person was accidentally wounded with a firearm in her house;
• Sh. Zh. 58 year-old, female, citizen of the Republic of Kosovo, who received the necessary medical treatment in UCCK.
Meanwhile operational-police actions continued and two firearms were seized;

A revolver of the type GLOCK,

A Revolver of the type ZASTAVA, as well as,

In connection with the case, the police took two suspects to the police station;

N. Zh male, 62 year-old, citizen of the Republic of Kosovo as well as,

M. Zh male 23 year-old, citizen of the Republic of Kosovo, suspected to be involved directly in the case.

Police investigators initiated an investigation to clarify all the circumstances regarding the case while against the suspects further procedures are being taken for serious bodily injury as well as unauthorized ownership, possession of weapons. 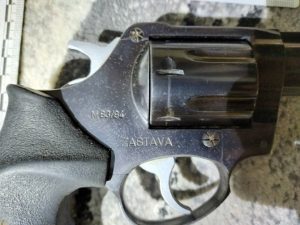 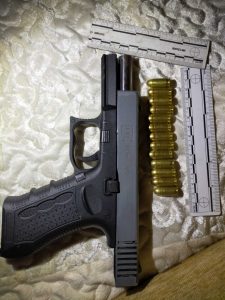