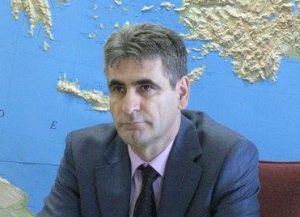 The Border Department operates within the Kosovo Police.

“Opened borders, but controlled and safe”

The overall purpose of Border Department is the development of a border security system, which will integrate all the state agencies with responsibility for controlling and supervision the borders, to keep Kosovo safe by increasing the border security and to apply the implemented laws.

MISSION OF THE BORDER DEPARTMENT

“To guarantee an increased border safety by preventing, revealing and capturing the criminals involved in transnational crime activities, terrorist activities, trafficking with human beings, and forgery of documents, transportation of weapons of mass destruction, narcotics, weapons, stolen vehicles and other smugglings prohibited by law”.

Border Department is part of Kosovo Police. The accomplishment of its mission regarding the controlling and surveillance of the border, control of entering, stay and movement of foreigners, prevention and combating of the transnational crime.

Border Policing was established in 1999 as UNMIK police, with the mandate of the resolution 1244, responsible for the control and safety in border crossing points. This policing was initially created to response the postwar Kosovo needs and its structure. It was in accordance with these needs.

Border police officers, Border Police, are professional; they carry the safety on their shoulders and are the only ethnicity in Kosovo assigned to be as:

Border Department is responsible for:

The internal and external increased development of border policing, will lead to the accomplishment of its mission. These developments will substantially improve the service quality by achieving and applying contemporary standards and technologies of more advanced forms.

Border Department is part of Kosovo Police and is organized at the:

The local level consists of:

This Directorate supervises and controls the following border crossing points of:

Regional Border Directorate “North” Lluzhan has under its supervision the major part of the state border with the Republic of Serbia.

This Directorate controls and supervises the following border crossing points:

This Directorate has under its control and surveillance the following border crossing points:

Integrated Border Management refers to the coordination and cooperation between all the authorities and agencies involved in the security and controlling of border, to enable a free circulation of people and goods, to establish efficient and effective management systems of integrated border, in order to achieve the common goal of opened, controlled and safe borders.

The concept of Integrated Border Management is based on three main pillars:

The Integrated Border Management and security of border constitute a special engagement in relation to the Constitution of the Republic of Kosovo, legislation in power, political actions and national security inside the country, as well as on the international relations especially in the membership process in European Union, other international structures and building trust with neighboring countries and beyond.

Border Department, exercises its duties and responsibilities in support of the:

All the laws that regulate the Border Department field are in power and harmonized with the EU legislation.

The model of policing applied by the Border Department

As a policing model, the Border Department applies the policing of supervision and controlling of border by observing, identifying and then reacting. Border Department will apply the security system based on the intelligence information, movement of crime and risk analysis. Solving of this policing model comes as a result of increased demands of citizens for a better quality of service, as well as based on the successful experiences of counterpart organizations of EU countries.

All these policing forms will have as a result:

The objectives and activities of the Border Department are:

EU concept about the Integrated Border Management for the Western Balkans covers the coordination and cooperation between all the important authorities and agencies involved in border security, in order to facilitate the circulation of goods, people and trade, to establish an effective system of integrated border management and to achieve the common goal for opened borders, but controlled and safe.

The key aspects of the concept of Integrated Border Management are the coordination and cooperation and support into three following pillars.

In order to increase the efficiency in border management, the international cooperation is very important as well. This cooperation can best be done by exchanging of information, determining of emergency procedures and communication channels.

Currently, in the International cooperation field, the Border Department is based on the memorandums of coordination signed with all neighboring countries.

Within the Ministry of Internal Affairs there is also the center for controlling and supervision of the border. In this center is accomplished the supervision with other agencies which operates in the border, such as: Kosovo Customs, Veterinary Agency and the Agency of Food control.

In order to raise the efficiency of border management, BKP aims in the future to draft common operational and action plans in case of various situations and emergency communication system with neighboring countries.