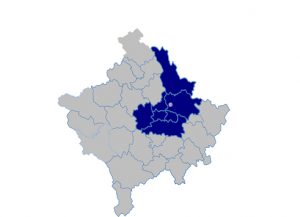 RDP of Prishtina has a territorial extension of 2.140.82 km² and a multiethnic population of 470.583 residents.

Within the RDP Prishtinë works the police stations, ‘Center’ in Prishtinë, ‘South’ in Prishtinë, ‘North’ in Prishtinë, Fushë Kosovë, Obiliq, Podujevë, Lipjan, Graçanicë, and Regional Traffic Unit located in Fushë Kosovë.
Number of employees in this RDP is 1100 police officers. As a characteristic that distinguishes this RDP is the fact that Prishtina is the capital of the Republic of Kosovo.
Prishtina RDP covers the territory of seven municipalities: Prishtina, Podujeva, Drenas, Lipjan, Fushë Kosova, Obiliq and Graçanica.
Prishtina as a capital of the Republic of Kosovo is a center of diplomatic, cultural and artistic developments of all living in Kosovo. In the responsibility area of this RDP-Prishtinë are also the facilities of special importance, such as: Parliament of the Republic of Kosovo, Presidency, Government with all ministries, KFOR command, General Directorate of Police, KSF command, embassies and diplomatic offices, Ombudsperson, Constitutional Court and other courts, State Prosecution, non-governmental organizations, Clinical University Center, Prishtina International Airport, thermo centrals, religious facilities, important cultural and scientific facilities, such as: National and University library, University of Prishtina, Academy of Science and Art, National Theater, Youth and Sport Center, student’s city with all dormitories, etc.